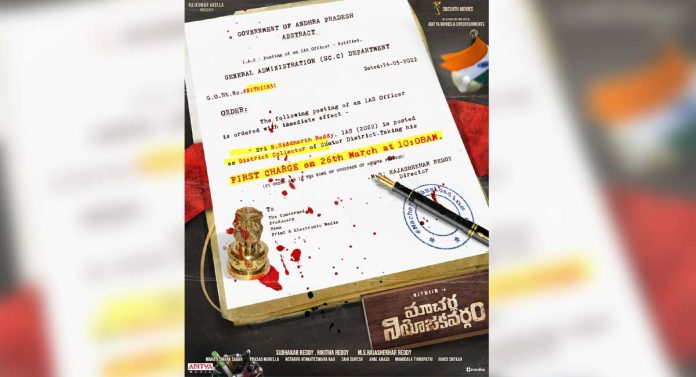 Hyderabad: Nithiin’s first-look poster from his upcoming movie ‘Macherla Niyojakavargam’ will be out on March 26.

The makers, who took to their social media profiles announced the same.

‘Macherla Niyojakavargam’s First Charge (First Look) will be dropped on March 26, as per the producers. The announcement for the first look has been made in a way that it looks like a Government Order. The bloody Government Order copy designates the protagonist as the District Collector in Guntur.

“The following post of an IAS officer is ordered with immediate effect – Sri N . Siddharth Reddy, IAS (2022) is posted as District Collector of Guntur District. Taking his FIRST CHARGE on 26th March at 10:08 AM”, it reads.

With this, it is to be understood that Nithiin plays a young IAS officer named Siddharth Reddy in the movie. This commercial drama marks the directorial debut for the noted editor, MS Raja Shekhar Reddy.

Catherine Tresa and Krithi Shetty will be seen as the female leads opposite Nithiin in ‘Macherla Niyojakavargam’, while others will appear in significant roles.

‘Macherla Niyojakavargam’ is produced by Sudhakar Reddy and Nikitha Reddy on Sreshth Movies in association with Aditya Movies & Entertainments.

Mahati Swara Sagar collaborates with Nithiin for the third time, after ‘Bheeshma’ and ‘Maestro’. Prasad Murella cranks the camera, while Mamidala Thirupathi provides dialogues and Sahi Suresh is the art director. Kotagiri Venkateswara Rao is the editor.