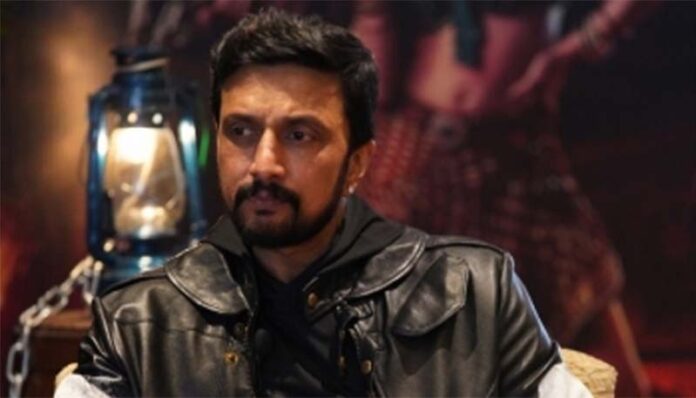 Kichcha Sudeep has a wall at home dedicated to his first love: Cricket

Kannada superstar Kichcha Sudeep is geared up for his next fantasy action-adventure film ‘Vikrant Rona’. It stars Sudeep in the titular role along with Nirup Bhandari, Neetha Ashok, and Jacqueline Fernandez.

Anup Bhandari’s directorial movie has created a huge impact on the audience with the trailer because of its 3D and visual effects. The actor recently visited the Capital to promote his film.

While talking about the cinematography, Kichcha praised the director of photography, William David and he told IANS: “He and Anup have sat together and worked a lot on the colour palette. And they got it right. No set can look better or good or no actor can look better or good without proper lighting, especially the sets. The sets need proper lighting to define a reality. Or if you want to take the set closer to reality, a realistic set, it is all about the lighting.”

“We can make it look like conventional lighting and make it look as unreal as possible also, but I think William has done his homework,” he added.

Not elaborating much about his role in the movie the actor says that he has tried to give his best to depict Vikrant on screen and he took the project after going through the script and analysing his character. In the movie, Vikrant sets about investigating the mysterious happenings in the cursed village.

He said: “It’s a new plot and a new character to me of course. I have done my best in whatever role I have played. I think you will enjoy every character just as much as you will enjoy mine. Every role has its own personality and space. And I think the film has got its own reach. It’s just not about one person’s stardom. I think it’s well captured, well pampered, well nourished, everybody’s taken care of it.”

Moving ahead, Sudeep talked about his love for cricket and how he dreamt of playing for India as a child.

“I wanted to play for India and become the captain as well, but that is not the point. After a time you realise that you are less talented. However, I realised that it was a difficult thing because I was up against giants. They would play for their states and the country. You should sit at home and enjoy yourself. I am friends with a lot of cricketers, and I feel so proud of that.”

He continued to share his passion for cricket and compared it with Shah Rukh Khan’s role of obsessive lover in 1993 movie ‘Darr’. Kichcha made it clear that he has a special attachment with cricket and now he is the captain of Karnataka Bulldozers cricket team that competes in the Celebrity Cricket League.

“I love cricket so much that I made sure that cricket loved me back. Like Shah Rukh Khan’s obsession in ‘Darr’, I pursued it relentlessly. So, cricket also started loving me, and I started playing in front of 50,000-60,000 people. It felt like nothing less than the IPL.”

He recalled an incident when he met former India cricket team captain Kapil Dev. “Honestly, everything was directed towards the game, and I was not expecting anything in return. A legend like Kapil sir sent me an iconic bat. He has made exactly 175 of those bats. One bat was even auctioned for Rs. 80 lakh. If Kapil sir decides to gift a few bats, he has a very long list to select from. I am not even a cricketer. I met him in 1983, expressed my love for him, and wanted a picture with him. I was quite small and he carried me. My camera was not working.”

“And when he came for ’83’, I said, ‘At least let me take a picture with you now.’ We have been in touch ever since. He and my wife share the same birthday-January 6. The bat that came to me was the 117th of the 175 bats, so you can understand how valuable it is. It was also signed by all the members of the 1983 batch. So, I do not know what more I should expect from cricket.”

“Kapil was an unreachable personality. He was the most sought-after cricketer when he was the captain, and he sent me a bat. I don’t think we can ask for more. He is such a dear brother of mine. We keep texting each other a lot. I and Rishabh Pant are also in touch. What is precious to me is that I love that game and everybody involved in it. It’s not as if I want something from them. I keep asking them for things like a fan. So, Josh Butler sent me a bat which he used to score a century in the IPL. I treasure all of that.”

He has a wall in his home which is dedicated to his passion and love for cricket and cricket legends.

“There is a wall in my home which is dedicated to everything related to cricket, including bats, balls, gloves, etc. RCB (Royal Challengers Bangalore) is the team from Karnataka, but Rajasthan Royals keep sending me their t-shirts and other things. And in return, they asked for my wicket keeping gloves, which means quite a lot. So, it’s really nice, and I have enjoyed these moments of my life.”

From his passion for cricket to his journey of becoming an actor was never easy but he made his place in the entertainment industry.

He shared: “I came into the film industry because I wanted to be a director and accidentally become an actor. So then I directed about six films. I think I just went to the floor. I’m glad that my journey wasn’t easy. If it was easy, probably I would have finished my career long back. I think I value what happened in my life and I think that is the best way to learn. Very few are lucky to not have hurdles and become stars very soon.”

“I’m happy with what it has offered me, the struggles, they are my assets today. If you ask me. What is it that I remember in my journey? It is all the struggle, only good things have never taught me anything. Success has never taught me anything. We learn from our mistakes,” he added, emphasising that hardship and hurdles made him strong and helped him in growing in his career.

Making a name in the industry was not easy for Sudeep but he gave his best and ‘Vikrant Rona’ is another project which is special. He spoke about his working experience with the director.

“I heard the script and liked it. Then we sat on it for a very long time. And then we started crafting it. This team has very special members I’m the only popular and the big name. That made me feel very good. Nobody was exactly behaving like they were with a big name. Everybody would comment, simple.”

“And I liked that part where I used to go play cricket between my shots. And all those actors were new, they were so honest, nobody was trying to manipulate and trying to dominate anybody that made the film even more special because everybody has done their role with utmost honesty. And I think we all have fallen into that. And ‘Vikrant Rona’ today as a character has stood up, I think many people around me made it look nice, just not me,” he concluded.