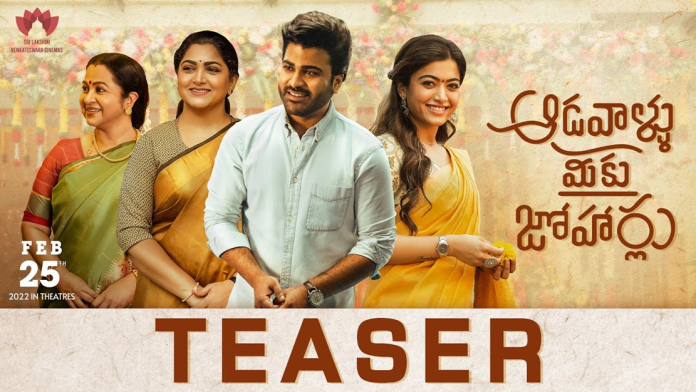 Hyderabad: With Sharwanand, Rashmika Mandanna, Khushbu, Radhika Sarathkumar, Urvashi, and others in important roles, the much-hyped family entertainer ‘Aadavaallu Meeku Johaarlu’ is readying for its grand release soon. The makers who dropped the teaser from the movie, promise a good family entertainer.

The teaser begins with an introduction by the hero, who quotes his helplessness, as his family members hunt for his bride-to-be. “From rejecting girls, to being rejected, we have come too far”, Sharwanand is seen saying on a sarcastic note.

As the teaser goes on, Sharwanand finally meets the girl of his dreams – Rashmika. Rashmika and Sharwa develop a good rapport with each other, but she seems to be avoiding marriage with him, which puzzles the hero.

Well, it appears like director Tirumala Kishore has followed the same narrative from his movie ‘Nenu Sailaja’, which has a similar track between the lead pair. But, what makes ‘Aadavallu Meeku Joharlu’ teaser interesting is the wit imbibed in the narrative.

Well, the movie is closer to its theatrical release and seems to appeal to the family audience. The production values make the teaser more appealing, as the buzz around the release increases.

Sudhakar Cherukuri is the producer, while popular cinematographer Sujith Sarang is handling cinematography, while Sreekar Prasad who won several national awards is the editor.