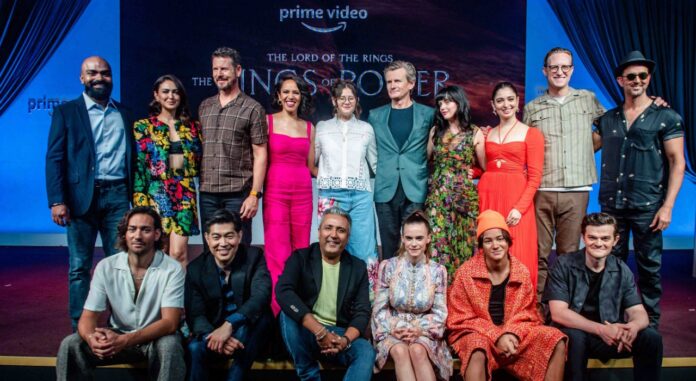 Prime Video’s The Lord of the Rings: The Rings of Power Asia Pacific Premiere Tour commences with a bang!

MUMBAI, India – August 18, 2022 – The fantastic ensemble of the much-anticipated Amazon Original series The Lord of The Rings: The Rings of Power journeyed to Mumbai for their epic Asia Pacific Premiere. Ahead of the grand evening, Showrunner and Executive producer JD Payne along with the cast – Robert Aramayo, Charles Edwards, Nazanin Boniadi, Lloyd Owens, Sara Zwangobani, Maxim Baldry, Megan Richards, Tyroe Muhafidin, Ema Horvath, Markella Kavenagh attended a press meet where they received a fabulous welcome from megastars and fans of The Lord of The Rings Hrithik Roshan and Tamannaah Bhatia.

Speaking about hosting the Asia Pacific premiere of the series in India, Albert Cheng, COO, Amazon Studios said, “We have seen fantastic customer adoption in India and the country has witnessed the maximum number of new customers worldwide who started streaming on Prime Video last year. It is one of the fastest growing and most engaged locales for Prime Video worldwide, all of this within just 5 years of launch. Indian Originals now have a massive fan following globally too as one in every five viewers of an Indian Original series is from outside India, and India has the largest slate of local Originals outside of the U.S. with over 70 shows in various stages of production and development. Mumbai recognized globally as one of the entertainment capitals in the world alongside Los Angeles and London. This made it an obvious choice for us to host our first Asia-Pacific premiere.”

Gaurav Gandhi, Country Head, Prime Video India said, “Tolkien is the originator of much of modern fantasy. His stories are both timeless and relatable. They continue to inspire people even today and stoke their imagination. That is why peopl

e keep returning to them again and again. And with this series, we are creating an epic world that our viewers would not have seen before. The ambition of the show, the universal themes excite us on behalf of our viewers. We are absolutely delighted to share that the series will release in 240+ countries and territories in more than 30 languages globally and customers in India will be able to watch it in Hindi, Tamil, Telugu, Malayalam and Kannada.”

Sushant Sreeram, Head of SVOD Business, Prime Video India said, “Our vision is to be the world’s most-loved entertainment destination, and the first-choice entertainment hub globally. To this end, our single mantra to exceed the entertainment needs of our customers worldwide has been – to SUPER SERVE! Our efforts at super serving customers have resulted in India today having amongst the highest proportion of Prime members who stream on Prime Video each month. Today, customers from 99% pin codes in India stream on Prime Video. Customers from more than 240 countries and territories are immersing themselves in Indian stories. Similarly, Indian viewers are immersing themselves in stories from across the world. Their willingness to venture out of what may be familiar and go in search for great stories, with compelling, nuanced narratives is unmatched.”

Speaking about her love for this epic world, our favourite Indian actress Tammanah Bhatia added, “Lord of the Rings: The Rings of Power has a cinematic appeal that is one of its own kind. I keep going back to it over and over again and yet it seems so fresh. It is truly visual storytelling at its best. Irrespective of the book or the screen adaptations that have been made, it is so engrossing and captivating that it takes you to another world. That is what I feel is the most enchanting thing that I find about The Lord of the Rings: The Rings of Power.” 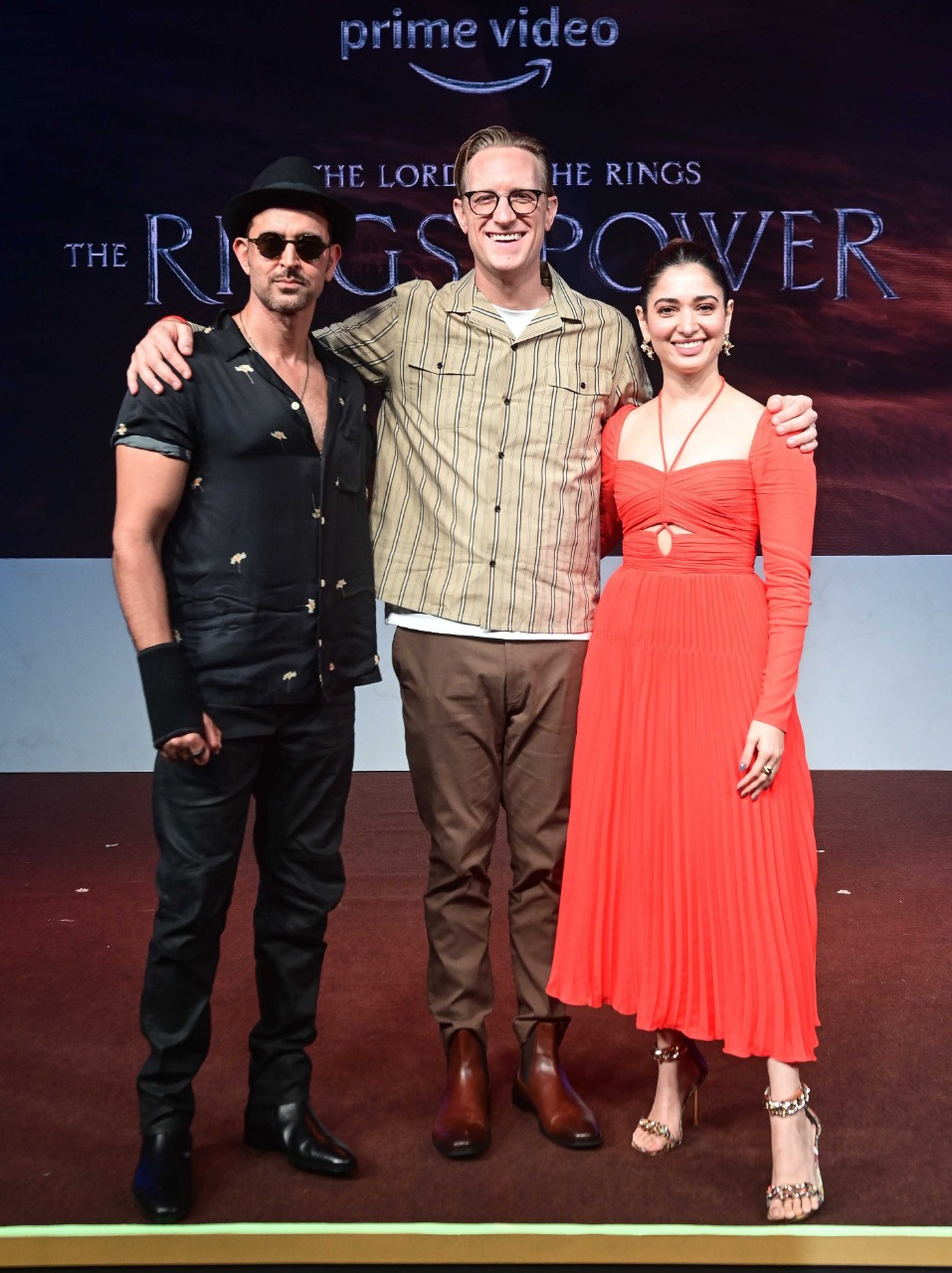 Speaking as a true fan of this epic world, megastar Hrithik Roshan said, “As an audience, I am waiting to see this visual extravaganza meet powerful content. I am excited that I will be able to watch the second age of Middle- earth on Prime Video on 2 September, 2022.There is a small connection between me and The Lord of the Rings that not many people are aware of. My father called me after binge watching the entire trilogy. We were so inspired by this world that my father felt that we can build on something that we’ve already made. So, we took Koi mil Gaya and through that Krrish was born. So, this is my little thank you to the author and The Lord of the Rings.”

Showrunner J. D. Payne said, “I came across Tolkien by watching the Peter Jackson film. I was in my 20s and they were one of the few films that really got to my heart. The way those films were made compelled me to take a deep dive and read all the books and I got super into it. Now these books have woven themselves into the very fabric of my life, very rarely does a day go by where I don’t make a reference to it. If something’s happening in my life, I would say I feel like Frodo carrying the Ring, you know? Be it weddings or funerals, I weave these quotes into eulogies and speeches! So, Tolkien is now a part of my soul,” said The Lord of the Rings: The Rings of Power showrunner J. D. Payne.

Talking about the cast, “Patrick and I knew we had to get the casting right as we’re telling an amazing story. It’s Tolkien’s untold story of the Second Age. So, we’re telling the story of the forging of the Rings of Power. We had two criteria for our casting: not only these actors needed to be great performers, but they also needed to have Middle-earth in them. When you look at them, you need to get the feel that they had actually transported from Middle-earth to our world. For over a year, we auditioned hundreds of people for every single role and found 22 needles in a huge haystack!” said The Lord of the Rings: The Rings of Power showrunner J. D. Payne. 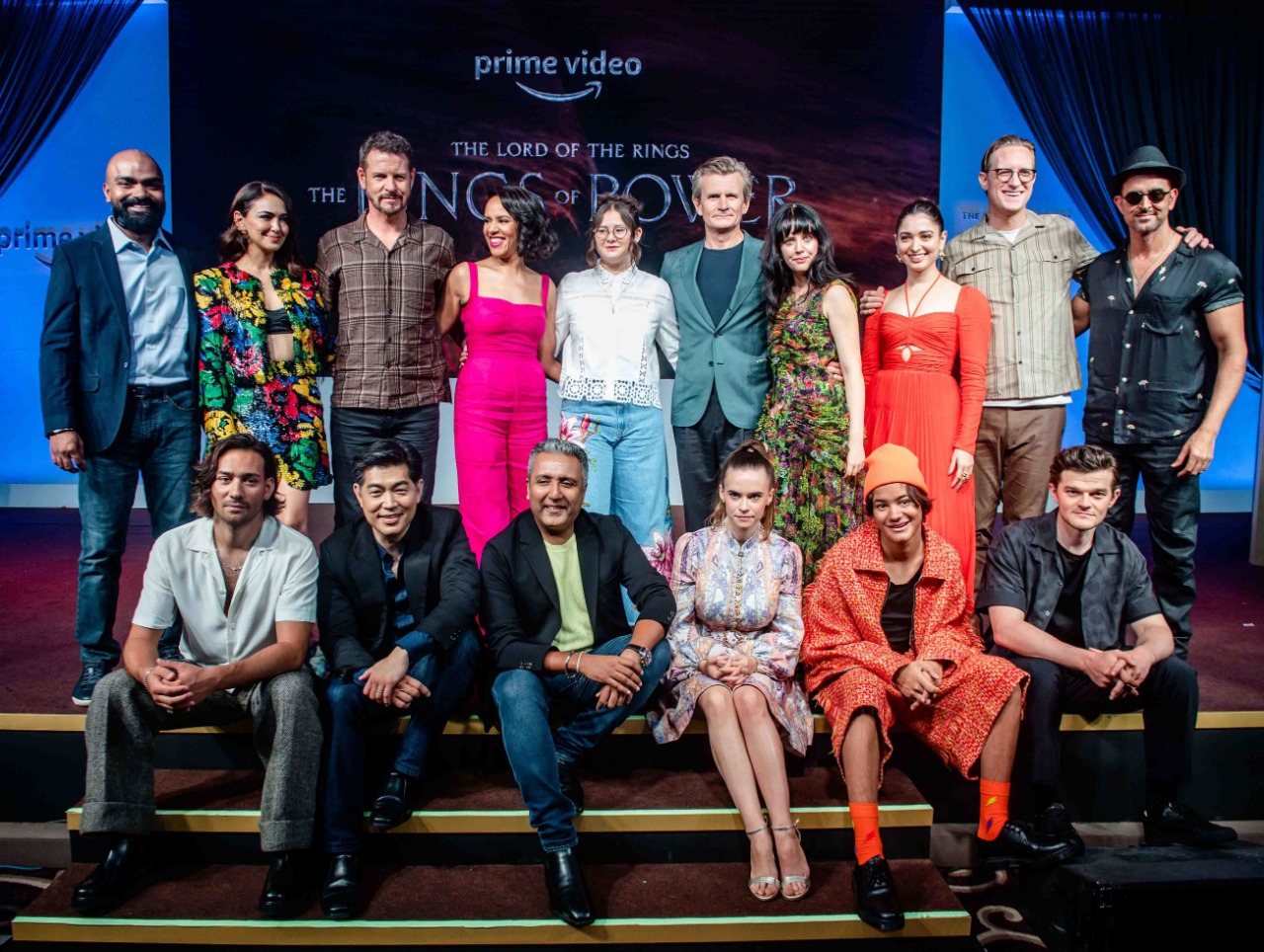 “My character is a healer, a single mother to a rebellious teenage son. I play a Southlander whose ancestors chose evil over good. She’s trying to redeem that. What I love about her is that she is very resilient, strong and nurturing. But also, her determination to redeem her people and to liberate them, resonates with me as someone who has been an activist for a while, back home in my country, Iran. Women in many places of the world have been at the forefront of democracy, freedom and human rights so that’s where I drew my inspiration from.” said actor Nazanin Boniadi who plays the character of Bronwyn in the series.

“The whole cast has been supportive and taken me under their wing. Specially Naznin. I was very very nervous. I was overwhelmed by JD Payne, Wayne Che Yip and Charlotte Brandstrom. Everyone I worked with, made me so comfortable which feel was really important. I went from Perth to Mumbai in front of all these beautiful people which for me is genuinely amazing!” said actor Tyroe Muhafidin who plays Theo.

Speaking on his visit to India and his character, actor Lloyd Owens “It’s really good to be back in India, I had a beautiful experience working here in the past. My character is a sea captain and is trying to deal with grief. He’s a legendary character, a hero and very dear to a lot of the Lord of The Rings fans because of his ultimate self-sacrifice in the end. The peak of my character though is a faithful side which needs independence. The head is trying to keep its family safe; the heart is trying to seek independence. I am truly very excited and privileged to be here.

“My experience was genuinely extraordinary. We built the capital city of Númenor, which took six months to build. The amount of skill and brilliance in every department is great: they built the city from the ground up with the changing phase of the landscape around it. With JD, I saw the geography of Númenor and was super excited.” said actor Lloyd Owens who plays the character of Elendil.

“It was an incredible experience to work in the show as a fan of fantasy. Otherwise too, it’s an absolute dream job. I’m so glad to be here in India with this fabulous cast. As a lover of fantasy, this has been one of the best roles of my career.” said actress Sara Zwangobani who plays the role of Marigold Brandyfoot in the series.

Prime Video will release two episodes of The Lord of the Rings: The Rings of Power on September 2, followed by a weekly release in English, Hindi, Tamil, Telugu, Malayalam, and Kannada that concludes on October 14.

Prime Video’s The Lord of the Rings: The Rings of Power brings to screens for the very first time the heroic legends of the fabled Second Age of Middle-earth’s history. This epic drama is set thousands of years before the events of J.R.R. Tolkien’s The Hobbit and The Lord of the Rings, and will take viewers back to an era in which great powers were forged, kingdoms rose to glory and fell to ruin, unlikely heroes were tested, hope hung by the finest of threads, and the greatest villain that ever flowed from Tolkien’s pen threatened to cover all the world in darkness. Beginning in a time of relative peace, the series follows an ensemble cast of characters, both familiar and new, as they confront the long-feared re-emergence of evil to Middle-earth. From the darkest depths of the Misty Mountains, to the majestic forests of the elf-capital of Lindon, to the breath-taking island kingdom of Númenor, to the furthest reaches of the map, these kingdoms and characters will carve out legacies that live on long after they are gone.