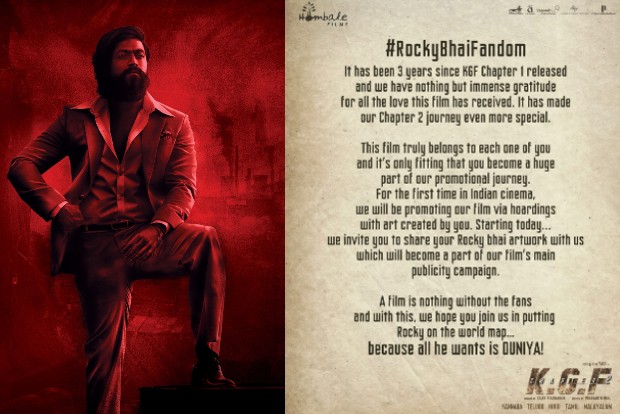 Actor Yash on Tuesday penned a heartfelt post on the success of KGF and thanked his fans for the massive success of the first part of the film.

The actor shared a note on Twitter that read, “#RockyBhaiFandom. It has been 3 years since KGF Chapter 1 was released and we have nothing but immense gratitude for all the love this film has received. It has made our Chapter 2 journey even more special. This film truly belongs to each one of you and it’s only fitting that you become a huge part of our promotional journey.”

He added, “For the first time in Indian cinema, we will be promoting our film via hoardings with art created by you. Starting today… we invite you to share your Rocky Bhai artwork with us which will become a part of our film’s main publicity campaign. A film is nothing without the fans and with this, we hope you join us in putting Rocky on the world map… because all he wants is DUNIYA!.”

‘KGF 2’ which is the sequel for the Blockbuster film ‘KGF’ is written and directed by Prashanth Neel. The film produced by Hombale Films has its music done by Ravi Basrur and is scheduled to release in theatres on April 14 clashing with Vijay’s ‘Beast’.