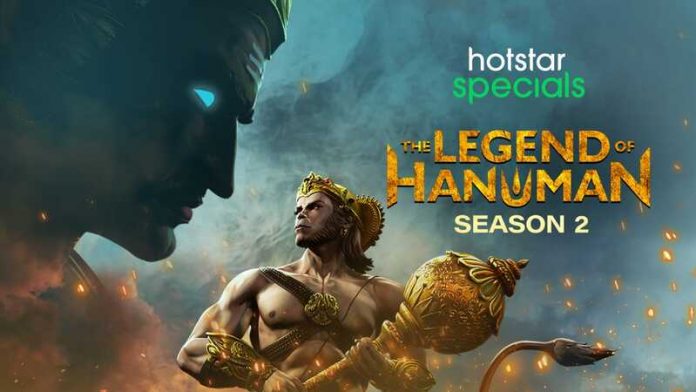 ~ Actor Sharad Kelkar returns as the narrator of the series ~

Mumbai, 2nd August 2021: After the resounding success of Season 1 that left viewers demanding more, Hotstar Specials presents The Legend of Hanuman returns to Disney+ Hotstar with another exciting chapter in the life of the beloved Mahabali Hanuman. Actor Sharad Kelkar returns as narrator, as the mighty warrior on the path of good, comes up against the biggest evil – Ravan, after discovering his powers in the previous season. All alone except with faith and strength from Lord Ram, witness the humble vaanara be finally awoken to embrace his true power and wisdom, making him an immortal legend.

Having garnered high praise for its advanced animation style and powerful contemporary storytelling that touched a chord with audiences across India, the spectacular visual experience returns in Season 2 of the mythological animation series produced by Graphic India and created by Sharad Devarajan, Jeevan J. Kang and Charuvi P. Singhal. Directed by Jeevan J Kang and Navin John, with lead writers Sharad Devarajan, Sarwat Chaddha, Ashwin Pande and Arshad Syed. The latest season takes Mahabali Hanuman’s journey forward and can be enjoyed by adults and families alike. All 13 episodes of the show will be available in 7 languages – Hindi, Tamil, Telugu, Marathi, Bengali, Malayalam and Kannada; and will release exclusively on 6th August 2021 on Disney+ Hotstar.

Sharad Devarajan, Co-Creator of the series and Co-founder, Graphic India said, “The response received by the first season of The Legend of Hanuman was amazing and humbling and has been a milestone for original Indian animation. The heroism of Mahabali Hanuman means so much to the world and so much to all of the people who worked on this project. With the latest season, we take the story to greater heights with another chapter in Mahabali Hanuman’s life and his first encounter with the demon King, Ravan which is brought alive through captivating visuals and comprehensible language. As he learns to wield his newfound power, it is a story of inner growth and heroism that we hope is relatable and inspiring to everyone.”

Synopsis
Though Hanuman faced great dangers in the first season, he was not alone. He had the strength of Angad to support him, the wisdom of Jambhvan to guide him, and even the antics of Nal and Neel to lift his spirits when times were dark. But now, Hanuman must face his greatest threat completely alone as he journeys across the sea to the golden city of Lanka. Will his new divine powers be enough when tested against the fury and might of the demon king, Ravan and his fierce sons and armies? Yet even in the darkness, Hanuman shall have one light to guide him, his faith and strength from Ram. This is the story of a humble vanara finally awoken to embrace his true power and wisdom to become an immortal legend. This is the story of Hanuman!

The legend of Hanuman Season 2 will launch exclusively on Disney+ Hotstar.

Disney+ Hotstar offers an unmatched entertainment experience to users with the world’s best stories and LIVE sporting action coming together on one platform – where subscribers can enjoy mega-blockbuster films directly releasing on the platform, the best of global movies and shows dubbed in Hindi, Tamil, and Telugu, best animation films, kids favourite characters, exclusive Hotstar Specials shows in seven languages LIVE sporting action and much more!